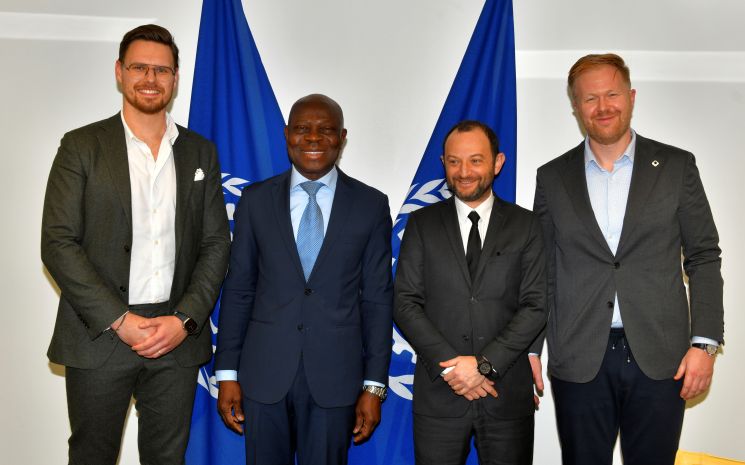 The purpose was to discuss potential future cooperation between the ILO and the social partners in the professional football sector and provide an update on the Global Labour Agreement (GLA) signed between FIFPRO and the World Leagues Forum in September 2022.

The meeting follows the 2022 Global Labour Agreement (GLA) between the World Leagues Forum (WLF) and the Fédération Internationale des Associations de Footballeurs Professionnels (FIFPRO).
The GLA is a ground-breaking agreement that aims to stabilize the professional football environment by strengthening employer and employee representatives on a worldwide level and promoting fair conditions of employment in football. It covers FIFPRO’s network of 66 national player unions, which together represent more than 60,000 professional footballers, and the WLF’s group of 45 national leagues comprising some 1,200 clubs.

A special focus was given on matters of workplace health and safety in the context of concussion management and head injuries in the game as well as questions focused on excessive workload and the match calendar.

ILO’s Director-General Gilbert F. Houngbo said: “The GLA is a significant step forward in addressing decent work issues in sport and in promoting the sustainability of the football industry. It does so by drawing on a key pillar of the ILO’s approach to decent work: social dialogue”. He added: “Some of the initiatives both of your organizations have already taken under the GLA, including on the management of head injuries, demonstrate that dialogue can lead to a common vision on protecting athletes and developing the sport,” he added.

Jerome Perlemuter, General Secretary of the WLF said: “Relations between employers and employees must take an important part in the international football decision-making. Issues such as calendar overload and players’ health should be tackled in a collective manner. Many thanks to ILO and Director-General Houngbo for their continued support".

Jonas Baer-Hoffman, General Secretary of FIFPRO declared: “The cooperation with and support of the ILO is essential at domestic, regional and international level to foster fundamental rights at work. Managing the future of work requires ever closer dialogue between employers and employees and we are happy that the GLA could showcase to the Director-General the progress made on occupational health and safety in just a few months of the existence of this new international bargaining framework.”

About WLF:
The World Leagues Forum is the world association of professional leagues with 45 members. Its purpose is to help improve governance structures within world football, represent the leagues and their member clubs to sport and political institutions, and foster cooperation between leagues. Media contact: Jerome Perlemuter, General Secretary, World Leagues Forum contact@worldleaguesforum.com.